Jon Szabo’s journey to business ownership is far from textbook stuff. As a young school graduate, he landed himself a plastering apprenticeship, jumped in and out of the trade, then tried to join the air force. After a car accident left him stranded in Melbourne, he turned away from the trade. Then he found out he had cancer.

It wasn’t until Jon’s father later fell ill that he decided to go back a third time to finish his apprenticeship.

“My Dad said, ‘If I don’t make it, I’d really like you to finish your apprenticeship’. The old bugger died a few days later, so I did it for him.”

After so many setbacks, most people would probably pack it in. But Jon had a fire in his belly, and it kept him going. 16 years since his first plastering opportunity, Jon’s back in the trade – and running his own business, JS Plastering.

After overcoming more than one obstacle, Jon had a fair bit on his plate. Finding a job management tool wasn’t his top priority. But he soon realised that doing things the old-fashioned way wasn’t conducive to a thriving trade business.

When Jon first started JS Plastering, he admits things were a bit disorganised. He used an old-school diary for booking client appointments, but even that was a best-case scenario, he says. Most times, he just tried to keep track in his head.

This often resulted in Jon double, triple or even quadruple-booking jobs, which only created extra admin – and looked unprofessional.

“It was all pen and paper, files, and there were things everywhere – then if I lost track of it, it just got messy. It got really hard.” 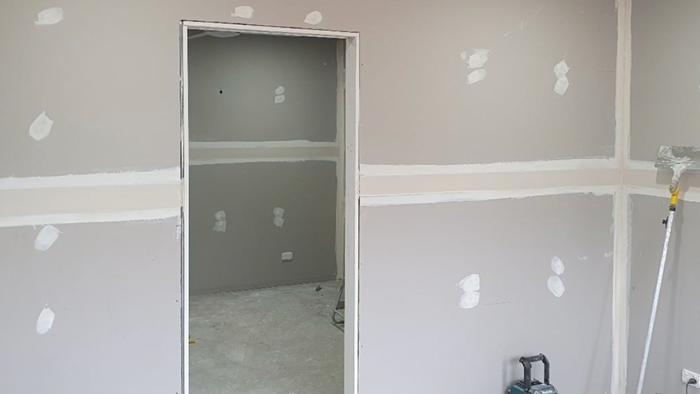 On top of that, Jon was also trying to navigate his invoicing – which he found almost impossible – “My bookkeeping skills were next to none.”

Feeling fed up, Jon decided to work with an accountant to help sort the backend of his business. This improved some things, but he still had the issue of double-booking customers – and it was starting to impact his reputation.

If Jon was to take his business to new heights, he knew he needed to find a way to do things differently.

Jon turned to Facebook, reaching out virtually to his fellow tradies – and a lot of them were using Tradify. When he asked for their opinion, they raved about Tradify’s scheduler, which was enough to convince him.

After a quick squizz online, Jon signed up for a free trial – and has never looked back. He says being able to access Tradify – and therefore his job info – from anywhere on any device has been an admin game-changer.

“The best thing I’ve found with it is the scheduling,” Jon adds.

It has significantly reduced overbooking his calendar, which means he can confidently take on more work.

When Jon fired quotes off in the past, it was always a little nerve-wracking. Because he relied on pen, paper and his memory, there was a lot of back and forth which took time and energy – and the result wasn’t always spot-on.

Thankfully, things are now much quicker with Tradify – Jon spends half the amount of time on his quoting.

“If it’s a big job, I can probably finish a quote within half an hour to an hour – rather than a couple of hours. There’s no risk of missing pieces of paper because all the info I need is in one place,” Jon says.

Jon can add his personal Ts and Cs into his quotes too, meaning all the nitty-gritty facts are there – and there’s no chance of missing important info.

What’s more, his quotes look professional every single time – and that’s having a positive impact on his work win rate.

Before he made the switch to Tradify, Jon’s accountant had already got him using Xero, which he admits helped the financial side of his business. When he learned that Tradify was compatible with his accounting software, it was all guns blazing for business.

“Because Tradify links with Xero, I’m in the office less than I was before,” he explains.

Tradify’s compatibility with Xero not only automates a lot of the financial work – “As soon as you hit send on an invoice, it sends it directly over to Xero” – it also gives Jon more control over the accuracy of his finances.

Considering what it’s done for his business, Jon’s an advocate for other tradespeople to get on board the Tradify train.

“If I see someone asking for a good scheduling programme, I’ll always recommend Tradify.”

Plastering the Tradify news all over town!