Freedom Electrical Gets Admin Under Control

Waking up from a paperwork nightmare

Diaries with hastily scribbled notes, jobs written on bits of paper, weeks’ worth of invoices scattered through the car – Mick Oates looks back on his old system with something like horror. After four years of running his electrical business, the paperwork was out of control.

“I was struggling. It was just mountains of paperwork; it was absolute turmoil!” he says.

But with the help of Tradify, the chaos has turned to order – and his car is cleaner than ever. “I’m a pretty good example of how you can turn things around with the right system.” 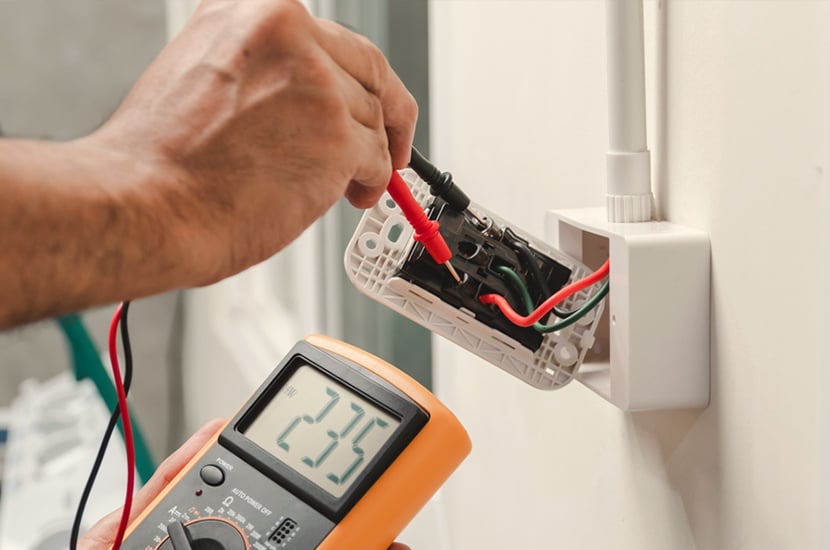 Freeing up time for Freedom

Mick’s been running his Australian electrical business - Freedom Electrical Services - for around six years. He does it all on his own, with help from the odd subcontractor.

That means managing invoicing, quotes, and scheduling himself – which, as it turns out, can be surprisingly complicated.

“It was diaries, writing jobs down, invoices sprawled through the car. The office was a nightmare. Looking back on it now, I don’t understand how I operated. It was an absolute nightmare.”

He’s been using Tradify for about two years. It’s helped him get out from under the paperwork mountain and freed up his time for more interesting stuff.

Getting the details down

Mick’s old paper-based system wasn’t just slow and stressful – it was also inaccurate. His records were spotty, and without accurate price lists on hand, he often wonders how many materials and hours went missing.

He reckons the system was so full of holes, entire jobs could have fallen through. “I probably had cases where I completely missed whole jobs.”

Now, quotes and invoices are sent through Tradify. The simple interface and access to up-to-date price lists mean he can generate a quote or invoice with a couple of clicks.

“It’s been a relief to have a system where I can track jobs on the go and not have to worry about it later. I’ll use the job section to track the hours, and it’s just a click of a finger to track time, then another click to have all the invoices come through.”

Quoting used to take ages – Mick would visit a site then look up price lists for materials – it was all a bit of a production. And the longer it took him to issue his quotes, the more likely it was that customers would give up and go elsewhere.

Mick explains that Tradify’s simple quoting system has changed all that. He’s set up templates for standard quotes, so he’s not starting from scratch every time. He gets clients to tick off what they want on a list, then generates quotes from his list of fixed prices. Simple.

“That has saved me days and days of time. When a job comes up, I have those kits set up, so I don’t have to build quotes from scratch every time. All I need is a quantity, and I can do that quote in half an hour.”

He’s also cut out some of his travel time by getting builders to send him site photos. “Not having to visit the site, that’s massive. I can get quotes through in 24 hours.”

More time for things that matter

Because much of that paperwork is now built into the day, those wasted admin hours are available for more interesting things – like building the business and branching out into other areas.

“The amount of time that Tradify has freed up for me has been priceless. Once a fortnight I’d spend a whole day just playing catch-up, now it’s just on the fly. It’s been unreal,” Mick says.

Mick’s not a paperwork guy, but he does love numbers. And being able to see exactly how the financial side of his business is working makes him happy.

“The biggest thing that’s helped me is the job management side of things and the integration with the accounting software. I like the structure of sending invoices and quotes out of Tradify.”

Tradify integrates with his accounting software, so info from quotes and invoices goes through automatically. He can also upload info like price lists from suppliers, so he can keep track of changing margins and keep an eye on his profits.

Even better, he finds the whole system really simple to use.

“The layout is super friendly, so easy to navigate, a quick process. The systems are all super simple, which is exactly what I need. Anything that complicates things is when you start to draw a line through the progress in my business.”

That simplicity is the key – and it’s a long, long way from the complicated, inefficient system he was using before. After making such a huge change in his business, Mick’s keen to spread the word to other trade businesses.

“You don’t know what you don’t know, and now I’m using Tradify, if I hear of anyone in the position I used to be in, I sit them down and say, ‘There’s a better way, trust me’.”

Mick is keen to plug Tradify

Searching for better systems for your trade business? Try a free 14-day trial or pop over to one of our live demo webinars to see Tradify in action and find out whether it’s right for you.